Our Story: How RoboSource Got to Where it is Today One thing I continue to read about marketing: It’s all about your story. We have a compelling one at RoboSource, so today, I’ll take some time to tell it. At least, our story so far. The RoboSource story has always been about our people, so I fully expect that our story will continue to grow and become more compelling as our people grow and change.

It all started at a small university in Indiana…

Back when Jason had a small company (called jrbeutler, inc.) that consisted of, well, just himself, he was consulting at a local logistics company and overseeing an outsourced team from India. At the same time, he was teaching a computer science class as an adjunct professor at Taylor University.

As the semester wore on, Jason discovered something surprising: the students were writing better, more concise, more maintainable code, than the India team. An idea formed: what if we outsourced software-writing to local college students rather than overseas?

From there, the ideas snowballed. What if we brought in a few carefully selected students to work as a part of our development team? What if we hired them for two full years and spent the time training them to program in a real development environment, as a part of a real programming team? Thus, the “RoboSource” part of jrbeutler, inc. was launched.

We hire some apprentices

We decided the best way to explore the idea of working with students was to work with students. So Jason (and John Hasenmyer, who was now a part of the company, too) hired two students: Bryant Sell and Andrew Smith. They were both in the class Jason had taught, and came highly recommended by professors. We told them to start working on stuff. John (we call him Hass here at RoboSource) decided to work on site at Taylor once or twice a week, to help Bryant and Andrew write software.

A part-time professor shares his knowledge

Around this time, Taylor University wanted to hire a new professor, but only had the budget for a half-time professor. A great opportunity opened up to us – let the professor work half for us and half for Taylor. This unique partnership with Taylor was great in many ways, but one thing especially stands out: it cemented for us our commitment to education. By seeing our newly developing apprentice program through a professor’s eyes, we were able to really start to figure out how to expect professional-quality work from full-time students. This experience was invaluable to us.

Our apprentices bring their friends

But our apprentices were patient. And we were determined. We got better and better at it. And a few months later, our apprentices brought a few of their friends to work for us, too. Ryan Szemplinski and Caleb Dinsmore joined the team. And since our Taylor team was growing and talking about their experiences, more and more Taylor students were expressing interest in working for us. Pretty soon, we were needing to use a process to find the best students, because we had more students wanting to work for us than we did available spots.

As we added students, we needed more people to run things. This is the time when I started working for RoboSource full time, running human resources and marketing. We also added another senior developer, our first project manager, and two other developers. As we grew, our finances became more and more complicated, so we hired a part-time controller. Then we found that we needed additional people to work with and train our apprentices, to do the actual work, to organize the actual work, to hire the new people, to pay bills, and to stay on top of the invoices. Our RoboSource family was growing!

At this point, when we all met together, we met at Jason’s and my home in Carmel. Although we weren’t ready to commit to an office building yet, We definitely needed somewhere to park our six students for the summer! So we joined Launch Fishers, which is a business incubator in Fishers, IN. It was a great place for us to hold staff meetings and work together in those first few years. 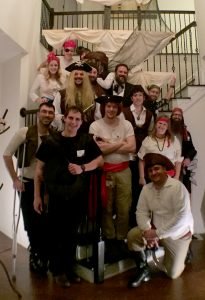 During this time, we worked hard to form a close community and make RoboSource a place where people felt safe and truly enjoyed working. During the summer with six students, we started having weekly game nights, where we’d invite all the students over for dinner and games once a week. Our full-time employees often showed up, too. We did some other neat things, like taking all of our developers and apprentices to a professional coding conference in Jacksonville, FL. We did some silly things, too, like all dressing up in pirate costumes and having a murder mystery party.

We also learned that community isn’t all about having fun together. It’s also about learning to trust each other and hold each other accountable. It’s about trusting that someone will do what they say they will do. It’s working extra hours when someone has a family emergency to help out. And we learned that just knowing these things are important doesn’t make them easy problems to solve.

2016 meant explosive growth for RoboSource. We started that year with 4 full-time employees and ended it with 22. During all this growth, we found that there were a lot of things we didn’t know how to do. Over 2015 and 2016, we consulted with a sales coach, a financial advisor, a strategy consultant, a human resources advisor, and Jason and I joined peer groups through the Strategy Forums of Indianapolis. All of these people and companies aided us on our journey. We learned a lot.

Also early in 2016, we realized that we were going to need an actual office space. After all, we’d hired 12 students for the summer! We moved into an empty building on 96th Street and settled into our first independent location.

Later that year, we outgrew our little office space and moved upstairs to a larger location. We added more people, including our first sales person, some quality engineers, and a lot more developers. A really neat thing happened in the spring of 2016 – three of our apprentices graduated, and we hired them as full-time employees! We found our passion growing from college students to include empowering young adults. We were amazed by how invigorated we were by having the youth in our offices full time. From this point on, much of our growth focused on recent college graduates. Today, more than half of our full-time employees are under the age of 28.

Our story starts to spread

At the end of 2016, we were awarded two grants through the Indiana Economic Development Corporation: one for training employees and one for hiring up to 30 new employees over the next few years. We take the training and coaching of our employees very seriously and now we are getting reimbursed for doing it!

Our story gained momentum. We were interviewed by several news outlets and got to participate in a radio show and podcast.

In March, we started something we call RoboSource U, which is a weekly class about either technology topics or leadership lessons. Every Friday, we start the day by meeting in a local classroom and focusing on bettering ourselves. We’re still working out the wrinkles, but we’re proud of our first efforts to formally train our employees.

Around the same time, we out-grew our space (again!) and moved downstairs in the same building. We’ve now been all over this building! But this spot is feeling more permanent, more real. For the first time, we have paint in our colors on the walls. And a door that locks! We have conference rooms and a copy room, and this great, unusual little room with a fireplace and a couch. You know, just in case. It’s a bit quirky, but it’s instilling a sense of pride in our little company.

We’ve settled into our offices and are chugging away at a record-number of projects. We have a new team structure that is working wonders. We have a lot of ideas and hopes and plans and only a limited amount of time to implement change. And that’s where we’re at today.