The Creativity of Technology 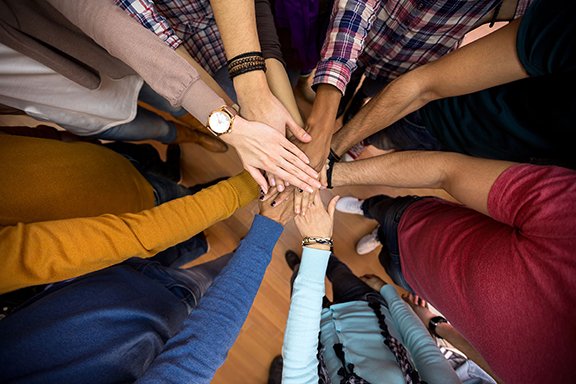 When you hear “technology,” what is your first thought?

Refrigerators? Computers? Guys in a room typing strings of numbers and letters on a keyboard? iPhones?

I’ll admit it wasn’t my first thought either. But it’s beginning to rise to the top. Because the more I learn about technology, the more I realize creativity is intertwined and inextricably linked to it.

Steve Jobs said once that “the best way to create value in the 21st century is to connect creativity with technology.”

He was probably right, but it’s not a new idea.

Our word “technology” comes from the Greek word “techne.” It means “art, skill, cunning of hand.” Wikipedia defines technology as “the collection of techniques…used in the production of goods or services.” And “creativity?” It’s “a phenomenon whereby something new and somehow valuable is formed.”

Linking creativity with technology isn’t a 21st century discovery. It’s as old as humanity, because humans are creative. Since Caveman said to Cavewoman, “I wonder what will happen when I hit this rock with this other rock,” and discovered fire, we’ve been producing new ideas and processes that add value to our collective culture.

It’s easy to think that technology is different from creative pursuits. You don’t have to look further than college campuses to see the divide between “STEM” and “non-STEM.” But really, the integration of creativity and technology is what keeps our society moving forward.

EdTech agrees: “If value is the ultimate goal, creativity is the engine that gets us there. The institutions that excel today are those that integrate imagination and problem solving, exploration and deep expertise. Research confirms the importance of a multidisciplinary thought process.”

It took me about 30 seconds to start a very incomplete list of people throughout history who have connected creativity and technology with exceptional results. For us in the 21st century, it’s not so much that we need to start connecting creativity with technology, it’s more that we need to continue in the tradition of those innovators that have gone before us (and live among us… sorry, Elon, didn’t mean to age you before your time). 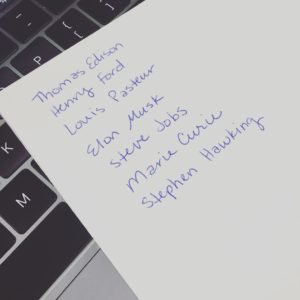 You’ve probably heard Edison’s famous quote, but if not, let me enlighten you. When asked about his unsuccessful attempts to make a lightbulb, he said “I didn’t fail. I found 1,000 ways it wouldn’t work.”

You can find this quote in about 60% of conversations encouraging people that it’s okay to fail.

But it also reminds us of something else. All those 1,000 possible solutions came from Edison’s creativity—generating novel ideas to solve a problem.

“I wonder what would happen…”

And there you have a light bulb.

“Inspiration can be found in a pile of junk. Sometimes, you can put it together with a good imagination and invent something.” – Thomas Edison

Ever heard of the Quadricycle? It was the beginning of the now ubiquitous car. He built it in a shed behind his home during his free time. (There’s nothing like free time to spark creativity!) He also revolutionized production of just about everything with his assembly line concepts and the idea that paying workers fair wages motivates them to work harder.

He once said, “If I had asked people what they wanted, they would have said ‘faster horses.’” He was never satisfied with the status quo (why settle for faster horses?). That’s a vital ingredient in creativity—it keeps technology moving forward. We want to be faster, more effective, more efficient. We want to be better. So we reach for new ideas and build on the ones we already have.

There was a lot of vaccination creation going around in the 19th century, but Edward Jenner gets all the credit for inventing the original vaccination for smallpox. (Thanks, dude.) It wasn’t hard to spot the problem—smallpox wasn’t secret or subtle. Most who caught the disease died from it. Those who didn’t wore the scars for the rest of their lives.

Which caused Jenner’s creative spark. He noticed that, though the vast majority of people had these deep scars on their faces, milkmaids in particular were known for having beautiful, smooth skin, even as adults. No one knew why… but it gave Jenner an idea.

He found that the milkmaids caught the milder cowpox virus and were then immune to smallpox.

And the smallpox vaccine was born.

Sometimes creativity and technological advancement is as simple as being curious and observant about the world around you.

“I shall endeavor still further to prosecute this inquiry, an inquiry I trust not merely speculative, but of sufficient moment to inspire the pleasing hope of its becoming essentially beneficial to mankind.” – Edward Jenner

He’s arguably the coolest human in technology right now. And not without good reason. Between his reusable rockets and his unbelievable (yet, somehow, still believable) goal to put men on mars, he just makes you want to go get your PhD in physics.

There are a lot of circumstances that collide to make him a tech icon, but one of those factors is that he’s one gutsy guy. His hyperloop idea is a prime example. He thinks it’s possible to transport people at lightning speeds. It sounds like a huge and probably impossible idea.

But it’s well on its way to becoming reality. Why? Because there was a small possibility it could work, and Musk was gutsy enough to jump on it. He thought outside the box and brought a lot of people outside with him—it’s snowballed into a whole company and a partnership with an enormous venture capital organization. And their first system is projected to be finished in 2021. According to Musk, “The first step is to establish that something is possible; then probability will occur.”

Prove it’s possible, and have the guts to follow through. Hey there, Martians. We come in peace.

“If something is important enough, even if the odds are against you, you should still do it.” – Elon Musk

Who else should be on this list of people who improve technology through creativity?