What We’re Reading: No Ego by Cy Wakeman 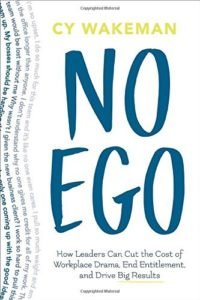 When I was invited to be part of a Human Resources book club, I accepted because it seemed like a great opportunity to expand my network. But I have to admit I was skeptical. I mean, really, who goes to an HR book club? When I told some of my co-workers where I was off to, they laughed. “Wow, an HR book club,” they said. “Can I come?” In the end, the joke was on them. This was one incredible book, and the discussion really helped drive the points home.

The fallacy of employee engagement

There’s truth here; obviously we want our employees to be bought into the company’s vision and engaged at work. You can’t argue with that.

But the focus on engagement has brought about an unintended result, and that’s where Cy Wakeman takes us in “No Ego.” While there’s nothing wrong with planning employee appreciation events or fighting for better benefits, letting this be your focus is the perfect way to kill true employee engagement and instead bring about an attitude of entitlement. While we might think that we all want more PTO or a better healthcare plan, when it really comes down to it, those things aren’t the reason we stay at a job. We stay because of purpose and feeling fulfilled, something traditional employee engagement moves can easily miss.

A few lessons learned from Cy (and a great group that helped me process – and was way more fun than you might expect!):

“Professionals give others the benefit of the doubt – they assume noble intent.”

I love this idea. Let’s stop protecting ourselves from each other and creating policy on top of policy to fight every imaginable problem before it surfaces. Instead, let’s be honest and candid with each other. (Incidentally, I also just finished “Powerful” by Patty McCord, Netflix exec. She also writes about how important it was for Netflix to get rid of needless policy after needless policy.)

Spend a week or two in an HR role, and you’ll certainly understand the draw to over-policy things. When it’s your job to explain to someone why they can’t take off the same Christmas week that a team member has already booked, it’s easy to move to policy instead of honest conversation. Sometimes policy is the right answer, but I think that especially for small business, more often, it’s not. Instead, it’s the easy answer.

This hit home for me, and as a result, I’m trying to learn to have the hard conversations. There’s a practical reason why two people can’t be off at the same time; explain it. Have a candid, honest talk about why someone isn’t eligible for a raise. Assume noble intent, and assume that employees will give you the benefit of the doubt. Don’t spend your days protecting yourself; instead, seek out opportunities to clear up misunderstandings.

This is so true in everyday life, as well. The waiter that brought you your salad with dressing RIGHT ON TOP OF IT instead of on the side? Yeah, he messed up, but he didn’t do it intentionally. His whole JOB is to make you happy, so you’ll leave more tip money. He’s certainly not pleased with himself either. But so often, we respond as if that waiter has been out to ruin-my-day, give-me-an-allergic-reaction, get-back-at-me, rather than just having an off moment or two. As we all do.

Assuming noble intent is a hugely freeing thing. And yes, sometimes you’ll get burned. After all, not everyone has noble intent. But most of us do.

My daughter is a sophomore in high school. Last year, her school launched a robotics club, and she was one of five freshmen that joined. At the end of the season, they elected her captain for 2018-19. No problem, until the club grew to 20 members of all classes in high school. Whoa. Suddenly, my quiet, soft-spoken kiddo was tasked with a real leadership role. As such, she’s run into a few challenges, like distracted students goofing off and generally not getting work done.

Just the other day, I found myself touting this advice: “Your job isn’t to be a policeman and keep people from playing on their phones or flirting. It’s never gonna happen. Instead, you’ve got to inspire them, get them excited.” Huh. Wonder where I got that idea?

Too often, we take the easy road in leadership, the one that’s prescriptive and that we feel like we can succeed with every single time. We go into boss mode. “Follow these steps” or “Do it this way because I said so.”

The much harder road? Inspiring people to greatness. Of course, this means that you have to be inspired yourself, which can be a full-time job. And getting people to be inspired to do what you want them to do isn’t quick or easy. But the result is worth it. Employees that are thinking human beings that solve problems and are held accountable yield way better results that robots.

And that leads to the next Cy-ism:

“Accountability is death to the ego.”

At RoboSource, we embrace accountability fully. It’s the way we’re able to work with such young developers. In fact, founder Jason Beutler often speaks on that topic: growing developers through accountability.

But this was an angle I hadn’t considered before. Basically, if we give employees clarity on our expectations of them and give them the tools they need to meet those expectations, ego can no longer play any part in the equation. If you don’t meet expectations, you either can own that truth and explain what you’ll be doing differently in the future, or you can make an excuse. Making an excuse is an obvious ego play. (“I couldn’t get that done because Johnny didn’t get his job done, so I didn’t have anything to do…” Basically, it’s not MY fault, it’s Johnny’s fault!)

That’s how you make someone’s ego a moot point: telling people that they are expected (and empowered) to meet a certain metric and holding them accountable to it, even if that means that they need to figure out a way to inspire someone else to complete work that’s holding them back. Excuses and whining are no longer relevant. Did you do it? Or didn’t you?

“Your circumstances are not the reason you can’t succeed; they are the reality in which you must succeed.”

This is true in so many areas of life. How often do we think:

That’s why I love Cy’s core belief. When it comes right down to it, your circumstances are your circumstances. Whether or not they are right or fair is only as significant as you are willing to work to change them.

You can sit around all day and moan about why something isn’t fair. Or you can figure out how to succeed in spite of it. Whatever your circumstances are, they are the ones in which you live, they are your reality.

Wow. This is hard-hitting.

In “No Ego,” Cy writes about employee engagement surveys that many companies ask employees to fill out annually, and how they can easily breed discontent and entitlement.

One of my book club members had an incredible example. She is the sole HR practitioner for a nonprofit organization that serves the underprivileged community in Indianapolis. When employees are hired into the practice, they are told that the organization is only open on evenings and weekends, because that’s when their clientele are available. Thus, the employees know they will be working odd hours as long as they are working there – all the employees do.

But each year, the HR practitioner is asked to send out an employee engagement survey that includes a question that is something like: “If you could change one thing about your job, what would it be?” Each year, the employees all write that they would work normal business hours. And then they get all riled up about it again, even though this is not something that will ever change, as it goes against the core mission of the organization.

Instead of asking employees for something they wish they could change AND how they would solve the problem, they are just asked what they would change.

It’s a ridiculous question: I wish I got paid double my current salary. I wish I only had to work every other month. I wish my company would fly my family to Paris for vacation each year.

These are more extreme examples of things that companies do every day to try to “win” at employee engagement: an unlimited vacation policy, a company chef, unlimited work-from-home days. All of these seem great at first, but then end up causing a lot of problems. And in the meantime, employees weren’t part of figuring out how to implement these benefits, so there’s no ownership in figuring out how to make it work. But from now on? They EXPECT to be able to work from home … no matter what!

I don’t want to give away all of Cy’s great advice, so I highly recommend you grab “No Ego” to read about her proposed solutions to some of these common Ego-related problems for yourself.

It was sure impactful to me, both as the Director of Talent at RoboSource and personally. It’s a great reminder to pull yourself up by your bootstraps, stop complaining, and start making a plan for success. Anyone can be convicted and learn from this book, no matter your title!